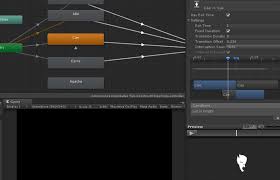 The clip offset only shows up if the animation is animating the root transform. It is meant to offset the animation position, and doesn't apply otherwise. Instead, you can create an override track and keyframe the position/rotation you want.

This video tutorial by Erwin Broekhuis explains the simple fix, which is to wrap the animated object in a parent object and attach the Animator to the parent instead. However, the video is using the Animation component which has been deprecated in favor of the newer Animator component.

Create an empty object off the root of the hierarchy. You can name the parent whatever you like, here it is called Parent.

Add the child object under the parent. In this walkthrough, we are simply adding a Cube 3D object. The child object should default to transform.position (0, 0, 0), which is a local coordinate position relative to the parent. You can name the child whatever you like, here it is called Cube.

Step 3: Add the Animator Component to the Parent

Select the Cube object in the Hierarchy window. Click on the Animation tab so that the Animation window is visible. You should be prompted to create an animation clip.

Note that creating the animation clip also adds a corresponding state for it to the CubeAnimatorController you attached to the Animator. This blog post does not cover anything related to the Animator Controller or state transitions.

Step 7: Add the Cube’s Transform.Position Property to the Animation Clip

In the Animation window, with the CubeMove clip (state) selected, click the Add Property button. Do not select the root Transform object but instead expand Cube and choose Cube > Tranform > Position.

At this point, you will see the Cube Position property in the Animation window with two keyframes added to the timeline, one at 0:00 and one at 1:00. These times refer to the frame number. By default an animation has 60 samples and will last 1 second at 60 frames per second.

Step 8: Add a Keyframe to the Animation

Click on the timeline at position 0:30 then click the button in the Animation window to add a keyframe. You will notice that the Animation editor will enter “record” mode with a few visual cues:

Change one of the Transform.Position property attributes. For example, change X from 0 to 2.

Click the Record button in the Animation window to stop recording.

Press the Play button in the Animation window to test your animation. You should see your Cube sliding 2 units along the X axis from its start position then return back.

To confirm that the relative position animation works as expected, move the Parent object somewhere else in the scene then click the Play button in the Animation window again. If everything is configured correctly, the animation should begin from the new location of Parent and animate 2 units along the X axis and back. It should not jump to the location where the animation was originally recorded.

15 - Introduction to Animation Parameters in Unity

Animation Parameters are variables that are defined within an Animator Controller that can be accessed and assigned values from scripts. This is how a script can control or affect the flow of the state machine. 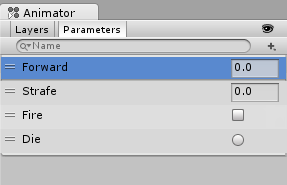 Float - a number with a fractional part

Bool - true or false value (represented by a checkbox)

Setting Up Characters with Animations in Unity with the Animator Controller

At the very core of animation is an illusion. The “Illusion of Life” is what it is called. We think an animation looks the best when it produces a greater illusion of a living character. This makes sense, does it not? When we see an animation of a living character, it triggers a memory or recognition of a live being we have seen in real life. Therefore, the task of the animator is to closely follow the rules of movement that we see in the real world because that will greatly increase the illusion that what you are seeing is a real being, moving and functioning. And this is the goal of this tutorial. We are going to start creating this “Illusion of Life” for a 2D character.

HOW TO MAKE 2D GAME ANIMATIONS IN UNITY

How to Rig and Animate a 2D Character in Unity

How to quickly rig and animate a 2D character in Unity with the 2D Animation package and tools. The following package versions are only supported for the following Unity versions:

You can use the 2D Animation package with the PSD Importer package to easily import your character artwork from Photoshop into Unity for animation. The PSD Importer is an Asset importer that supports the import of Adobe Photoshop .psb files into Unity and generating a Prefab made of Sprites based on the source file and its layers (see Adobe’s documentation on Layer basics).

The .psb file format has identical functions as the more common Adobe .psd format, with additional support for much larger image sizes. See the PSD Importer package documentation for more information about the importer’s features

You can improve the performance of the animated Sprite’s deformation at runtime by installing the Burst and Collections package from the Package Manager. This allows the 2D Animation package to use Burst compilation to speed up Unity’s processing of Sprite mesh deformation.

The package has been tested with Burst version 1.1.2 and Collections version 0.1.1-preview.

When the character Prefab is brought into the Scene view, Unity automatically adds the Sprite Skin component to any Sprite that have any bone influences. This component is required for the bones deform the Sprite Meshes in the Scene view.